Our club culture is as important or more to us as the martial arts that we teach because we believe in developing good human beings and this translates to an inclusive and safe training environment. All our members act as ambassadors for our club and the martial arts that we promote. Martial arts, to us, has always been about combining skill, integrity and an outlook on life that benefits us as well as the people in our lives. This is reflected in the way our adults, children and family members that are involved in our school.

Our core values are mutual respect, trust and inclusiveness. Kaizen Lab Jiujitsu is a place where everyone, from senior members to newly joined members, respects themselves and one another, trusts that they have their team members best interest and safety in mind and includes each other as one of the team. Where there are ways to improve, we will continue to do so to ensure all men, women and children who step through our doors enjoy their martial arts journey.

We look forward to welcoming you on the mat to join us for this wonderful journey.

As a father, coach and mentor, Brandon sought to create a safe training environment to share his passion for martial arts with his family and friends. He wanted an environment that allowed him to develop training programs that all members could benefit from, including his own children, to bring out the best in people.

Brandon is passionate about martial arts and, in addition to his expertise in Brazilian jiu jitsu, he has had extensive training in a range of different systems, including various Filipino weapon combatives, judo, kung fu and kick boxing to name a few.

You will find Brandon on the mats most nights teaching, demonstrating, rolling and just having fun. 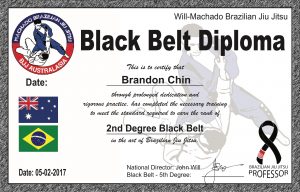